It has been more than a year since the last release of Structure Synth, but now a new version is finally ready.

The biggest additions are the new raytracer and the scripting interface for animations. The raytracer is not an attempt to create a feature complete renderer, but it makes it possible to create images in a quality acceptable for printing without the complexity of setting up a scene in a conventional raytracer. 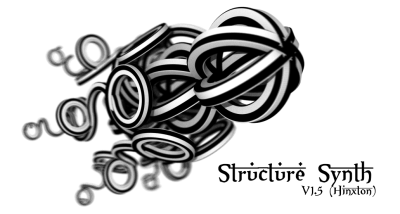 As something new, there is now an installer for Windows. It is still possible to just unzip the archived executable, but the Windows installer offers file associations for EisenScript files.

The raytracer and JavaScript interface are described in more details in the blog posts linked to above.

The OBJ exporter is simpe to use: Choose ‘Export | OBJ Export…’ from the menu. Since the OBJ format does not support spheres, these must be polygonized before export: it is possible to adjust the resolution for this. OBJ does not directly support colors either, so I’ve made it possible to group the OBJ output into sections according to either color or tags (or both). The group and material will be named after the OpenGL color, e.g.

Another new feature which probably requires a bit of explanation is the preprocessor generated random numbers. They can be used using the following syntax:

The above fragment will produce ten boxes, with a random size between 1 and 3. But notice that each box will have the same size: the ‘random[1,3]’ is substituted at compile-time, not run-time.

I’ve had several request for some way to produce random variation each time a rule is called, but this would require rather large changes to Structure Synth, since the EisenScript program is compiled into a binary structure at compile time, and I would essentially need to turn the builder into a parser to accomodate this (which would be slow).

Well, that’s about it.