When I decided to implement the raytracer in Structure Synth, I figured it would be an easy task – after all, it should be quite simple to trace rays from a camera and check if they intersect the geometry in the scene.

And it turned out, that it actually is quite simple – but it did not produce very convincing pictures. The Phong-based lighting and hard shadows are really not much better than what you can achieve in OpenGL (although the spheres are rounder). So I figured out that what I wanted was some softer qualities to the images. In particular, I have always liked the Ambient Occlusion and Depth-of-field in Sunflow. One way to achieve this is by shooting a lot of rays for each pixel (so-called distributed raytracing). But this is obviously slow.

So I decided to try to choose a smaller subset of samples for estimating the ambient occlusion, and then do some intelligent interpolation between these points in screen space. The way I did this was to create several screen buffers (depth, object hit, normal) and then sample at regions with high variations in these buffers (for instance at every object boundary). Then followed the non-trivial task of interpolating between the sampled pixels (which were not uniformly distributed). I had an idea that I could solve this by relaxation (essentially iterative smoothing of the AO screen buffer, while keeping the chosen samples fixed) – the same way the Laplace equation can be numerically solved.

While this worked, it had a number of drawbacks: choosing the condition for where to sample was tricky, the smoothing required many steps to converge, and the approach could not be easily multi-threaded. But the worst problem was that it was difficult to combine with other stuff, such as anti-alias and depth-of-field calculations, so artifacts would show up in the final image.

I also played around with screen based depth-of-field. Again I thought it would be easy to apply a Gaussian blur based on the z-buffer depth (of course you have to prevent background objects from blurring the foreground, which complicates things a bit). But once again, it turned out that creating a Gaussian filter for each particular depth actually gets quite slow. Of course you can bin the depths, and reuse the Gaussian filters from a cache, but this approach got complicated, and the images still displayed artifacts. And a screen based method will always have limitations: for instance, the blur from an object hidden behind another object will never be visible, because the object is not part of the screen buffers.

So in the end, I ended up discarding all the hacks, and settled for the much more satisfying solution of simply using a lot of rays for each pixel. 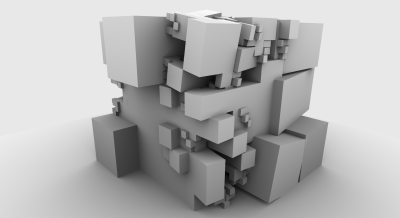 This works remarkably well. You can simulate all these complex phenomena with a reasonably number of rays. And you can use more clever sampling strategies in order to reduce the noise (I use stratified sampling in Structure Synth). The only drawback is, that you need a bit of book-keeping to prepare your stratified samples (between threads) and ensure you don’t get coherence between the different dimensions you sample.

Another issue was how to accelerate the ray-object intersections. This is a crucial part of all raytracers: if you need to check your rays against every single object in the scene, the renders will be extremely slow – the rendering time will be proportional to the number of objects. On the other hand spatial acceleration structures are often able to render a scene in a time proportional to the logarithm of the number of objects.

For the raytracer in Structure Synth I chose to use a uniform grid (aka voxel stepping). This turned out to be a very bad choice. The uniform grid works very well, when the geometry is evenly distributed in the scene. But for recursive systems, objects in a scene often appear at very different scales, making the cells in the grid very unevenly populated.

Another example of this is, that I often include a ground plane in my Structure Synth scenes (by using a flat box, such as “{ s 1000 1000 0.1 } box”). But this will completely kill the performance of the uniform grid – most objects will end up in the same cell in the grid, and the acceleration structure gets useless. So in general, for generative systems with different scales, the use of a uniform grid is a bad choice. 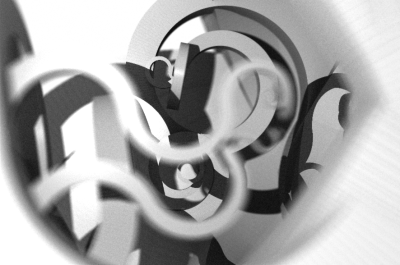 Not that is a lot of stuff, that didn’t work out well. So what is working?

As of now the raytracer in Structure Synth provides a nice foundation for things to come. I’ve gotten the multi-threaded part set correctly up, which includes a system for coordinating stratified samples. Each thread have its own (partial) screen space buffer, which means I can do progressive rendering. This also makes it possible to implement more complex filtering (where the filtered samples may contribute to more than one pixel – in which case the raytracer is not embarrassingly parallel anymore).

Materials. As of now there is only very limited control of materials. And things like transparency doesn’t work very well.

Filtering. As I mentioned above, the multi-threaded renderer supports working with filters, but I haven’t included any filters in the latest release. My first experiments (with a Gaussian filter) were not particularly successful.

Lighting. As of now the only option is a single, white, point-like light source casting hard shadows. This rarely produce nice pictures.

In the next post I’ll talk a bit about what I’m planning for future versions of the raytracers.