This post talks about double precision numbers in OpenGL and WebGL, and how to emulate them if there is no native hardware support.

In GLSL 4.00.9 (which is OpenGL 4.0) and higher, there is a native double precision floating point type. And if your graphics card is able to run OpenGL 4.0, it most likely has native hardware support for doubles (except for a few ATI/AMD cards). There are some caveats, though: 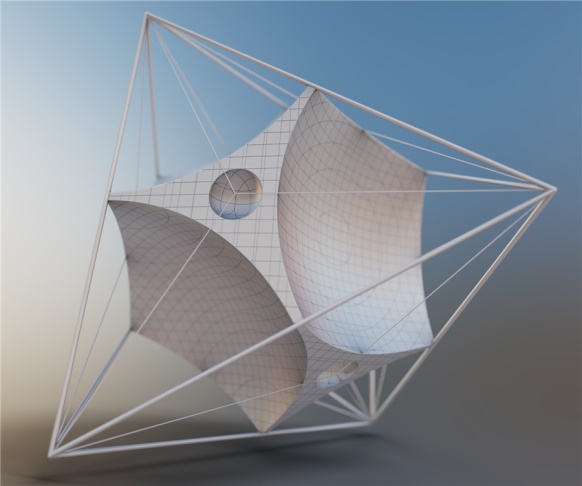 In order to use double precision, you must either specify a GLSL version 4.00 (or higher) or use the extension:

I used the functions by Henry Thasler described here in his posts, to emulate a double precision number stored in two single precision floats. The worst part about doing emulated doubles in GLSL, is that GLSL does not support operator overloading. This means the syntax gets ugly for simple arithmetics, e.g. ‘z = add(mul(z1,z2),z3)’ instead of ‘z = z1*z2+z3’.

On Nvidia cards, it is necessary to turn off optimization to use Thasler’s code – this can be done using the following pragmas: 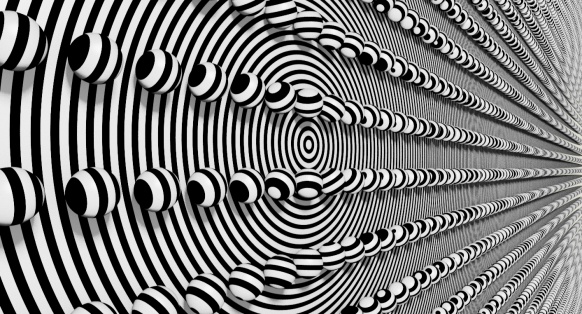 To test performance, I used a Mandelbrot test scene, rendered at 1000×500 with 1000 iterations in Fragmentarium. The numbers show the performance in frames per second. The zoom factor was determined visually, by noticing when pixelation occurred.

Notice that the Tesla card was running on Windows in WDDM mode, not TCC mode (since you cannot use GLSL shaders in TCC mode). Not that I think performance would change.

WebGL does not support double precision in its current incarnation. This might change in the future, but currently the only choice is to emulate them. This, however, is problematic since WebGL seems to strip away pragmas! Henry Thasler’s emulation code doesn’t work under the ANGLE layer either. In fact, the only configuration I could get to work, was on a Intel HD 3000 GPU with ANGLE disabled. I did create a sample application to test this which can be tried out here: 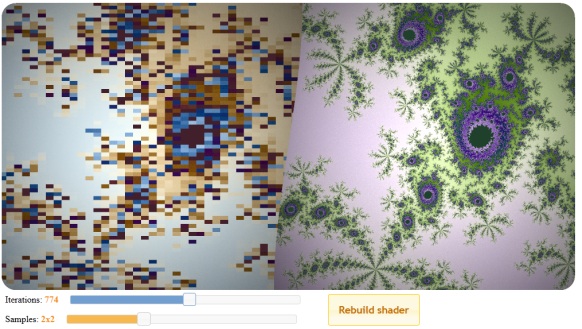 Click to run WebGL app. Left side is single-precision, right side is emulated double precision. Here shown on Firefox without ANGLE on a Intel HD 3000 card.

It is not clear why the WebGL version does not work on Nvidia cards. Floating points may run at lower resolution in WebGL, but I’m using the ‘precision highp’ qualifiers. I also tried querying the resolution using glContext.getShaderPrecisionFormat(…), but had no luck – it is only available on Firefox, and on my GPU’s it just returns precision=0.

The most likely explanation is that Nvidia drivers perform some optimizations which spoils the emulation code. This is also the case for desktop OpenGL, but here the pragma’s solve the problem.

which I suspect the well-meaning compiler might translate to ‘z=b’, since the rounding errors normally would be insignificant. Judging from some comments on Thasler’s original posts, it might be possible to prevent this using constructs such as: ‘z = a – float(a-b)’, but I have not pursued this.

Except that there are no double-precision sliders (uniforms), it is straight-forward to use double precision code in Fragmentarium. The only thing to remember is that you cannot pass doubles from the vertex shader to the fragment shader, which is the standard way of passing camera information to the shader in Fragmentarium.

I’ve also included a small port of Thaslers GLSL code in the distribution (see “Include/EmulatedDouble.frag”). It is quite easy to use (for an example, try the included “Theory/Mandelbrot – Emulated Doubles.frag”).

One thought on “Double Precision in OpenGL and WebGL”