Gamma correction is certainly not the most sexy topic in computer graphics. But it needs to be taken into account whenever you perform almost any kind of graphical manipulation.

The most widely used way to transfer image and color information is by encoding them as 8-bit RGB colors. Unfortunately, the human eye does not perceive brightness linearly as a function of the physical intensity. Since we are dealing with only 256 levels for each color channel, we apply a non-linear encoding – a gamma encoding – to make the most of our limited bits – otherwise we would experience banding in the range where the eye is most sensitive.

The display hardware then performs the inverse transformation for the final output: \(Linear = Encoded^{1/0.45} = Encoded^{2.2}\). This last exponent (2.2) is referred to as the gamma value.

On a modern computer, this means that all 8-bit media (your typical images, such as JPG’s and PNG’s) are gamma encoded, and not stored with linear intensities. The 8-bit framebuffers that are sent to the GPU, are also expected to be gamma encoded to make the most of the limited range. So far, all is well: you can read an image from a JPG and send it directly to the framebuffer – it will then display correct.

But problems arise when you start manipulating the graphics data. For instance, imagine you are downsizing an image with a checkerboard pattern of pure white and pure black pixels, until is small enough to be constant colored. You might guess, that the proper average value should be 0.5 (this discussion assumes that color values are not in the integer range [0,255], but normalized to [0,1]). But if you are working in gamma corrected space, the correct value is (0.5^(1/2.2)) =~ 0.73. This is the value you should send to the framebuffer in order to get an average physical intensity of pure black and white on your monitor. Notice that all browsers, and many photo manipulation programs fail to perform correct gamma-aware resizing.

The same applies to 3D graphics. All these lighting and shades techniques (e.g. Blinn-Phong shading) are designed to work in linear intensity space.

So the correct procedure when working with graphics is to convert all gamma encoded media to linear intensities, perform any calculation/blending/averaging, and convert back to gamma encoding. Notice, that this requires that you use something with more resolution than 8-bit integers (typically 32-bit floats) when working in linear space. Otherwise, too much resolution would be lost, and the whole point of gamma encoding would be lost. Also notice that media and images in high dynamic formats, such as HDR (.rgbe) and RAW typically are in linear space and should not be converted.

The following image sums up when and how to use gamma encoding and do conversions: 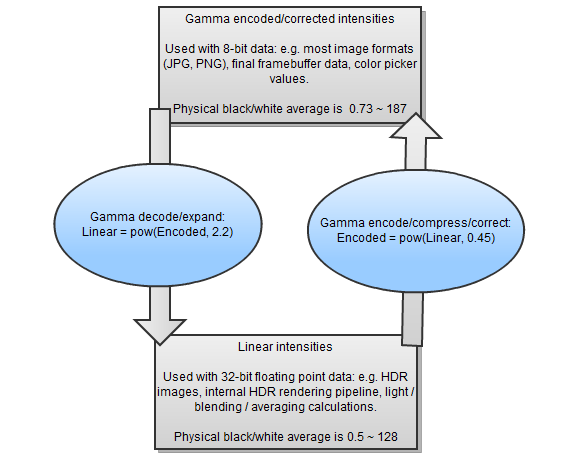 Here is an example of an image with and without a gamma-aware rendering pipeline:

The image on the left has been rendered completely ignoring gamma. The image on the right has proper gamma handling. Notice, that gamma-aware rendering does not necessarily look better – If you turn on gamma correct rendering, you images will be lighter, and might loose contrast, so you might have to adjust light sources and exposure.

In Fragmentarium the base classes “Progressive2D.frag” and “DE-raytracer.frag” are both gamma-aware. When you implement a color function, e.g. for the 2D case:

and for the 3D case:

the returned color is expected to be gamma corrected. If you want to supply linear colors, insert a

at the top of the script.

And all the rest…

Many gamma discussions on the internet revolve around how old CRT monitors expected a non-linear input. And it is indeed true that older CRT monitors had a relation between the light intensity and the applied voltage which was roughly like: \(intensity = voltage^{2.5}\). But modern displays, such as the TFT panels, do not have similar simple power law relations between the voltage and the intensity. Still, when you send 8-bit data to the framebuffer, you must gamma encode it, with a gamma of around 2.2. This will not change for as long as 8-bit data is used as data transfer format.

A few other points: