Some time ago, I became aware that the raytracer in Fragmentarium was somewhat slower than both Fractal Labs and Boxplorer for similar systems – this was somewhat puzzling since the DE raycasting technique is pretty much the same. After a bit of investigation, I realized that my standard raytracer had grown slower and slower, as new features had been added (e.g. reflections, hard shadows, and floor planes) – even if the features were turned off!

One way to speed up GLSL code, is by marking some variables constant at compile-time. This way the compiler may optimize code (e.g. unroll loops) and remove unused code (e.g. if hard shadows are disabled). The drawback is that changing these constant variables requires that the GLSL code is compiled again. 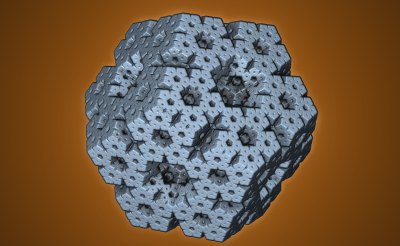 It turned out that this does have a great impact on some systems. For instance for the ‘Dodecahedron.frag’, take a look at the following render times:

The fractal rotation matrices are the matrices used inside the DE-loop. Without the constant declarations, they must be calculated from scratch for each pixel, even though they are identical for all pixels. Doing the calculation at compile-time gives a notable speedup of 2.4x (notice that another approach would be to calculate such frame constants in the vertex shader and pass them to the pixel shader as ‘varying’ variables. But according to this post this is – surprisingly – not very effective).

The next speedup – from the ‘Anti-alias’ and ‘DetailAO’ variables – is more subtle. It is difficult to see from the code why these two variables should have such impact. And in fact, it turns out that combinations of other variables will amount in the same speedup. But these speedups are not additive! Even if you make all variables constants, the framerate only increases slightly above 5.6 fps. It is not clear why this happens, but I have a guess: it seems that when the complexity is lowered between a certain treshold, the shader code execution speed increases sharply. My guess is that for complex code, the shader runs out of free registers and needs to perform calculations using a slower kind of memory storage.

Interestingly, the ‘iterations’ variable offers no speedup – even though the compiler must be able to unroll the principal DE loop, there is no measurable improvement by doing it.

In Fragmentarium variables can be locked (made compile-time constant) by clicking the padlock next to them. Locked variables appear with a yellow padlock next to them. When a variable is locked, any changes to it will first be executed when the system is compiled (by pressing ‘build’). Locked variables, which have been changes, will appear with a yellow background until the system is compiled, and the changes are executed.

Notice, that whole parameter groups may be locked, by using the buttons at the bottom. 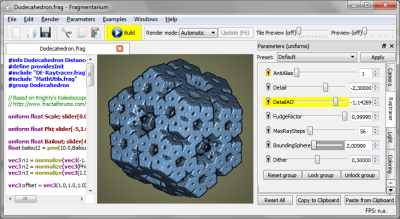 The ‘AntiAlias’ and ‘DetailAO’ variables are locked. The ‘DetailAO’ has been changed, but the changes are not executed yet (the yellow background). The ‘BoundingSphere’ variable has a grey background, because it has keyboard focus: its value can be finetuned using the arrow keys (up/down controls step size, left/right changes value).

In a fragment, a user variable can be marked as locked by default, by adding a ‘locked’ keyword to it:

Some variables can not be locked – e.g. the camera settings. It is possible to mark such variables by the ‘NotLockable’ keyword:

The same goes for presets. Here the locking mode can be stated, if it is different from the default locking mode:

Locking will be part of Fragmentarium v0.9, which will be released soon.