By coincidence I came across Jeff Minter’s company Llamasoft and surprisingly discovered that it was still going strong.

Jeff Minter, probably most famous for his somewhat… surreal C64 games (“Attack of the Mutant Camels”, “Revenge of the Mutant Camels” and even “Metagalactic Llamas Battle at the Edge of Time”), apparently has been hacking away on light synthesizers for the past twenty years.

His light synthesizers are complex visualization modules either music-controlled or driven by human interaction. And his latest incarnation, Neon, is actually used in the Xbox 360’s dashboard.

The Neon Light Synthesizer in Action.

Who would have guessed that Llamasoft code would end up in the Xbox 360 firmware?

Experimental Gameplay started out as a student project at Carnegie Mellon University in 2005.

Given three basic rules (“Each game must be made in less than seven days / by only one person / be based around a central theme (e.g. gravity or swarms)”) some very interesting projects were created. Since then the website has opened up, and everyone is allowed to post their experimental games.

The experiences gained from the project are summed up in: How to Prototype a Game in Under 7 Days (Gamasutra Feature).

The Crowd. Actually not a game, but beautiful none-the-less.

On a Rainy Day. Surreal.

Mechanical programming of robots in the year 60 AD:

First seen on abstractmachine (now that is a site with a design to remember).

Processing is a Java-based environment for creating digital art. ProcessingBlogs often showcases examples of Processing creations. This Flock of birds demo and the Webcam controlled video pong are nice examples. 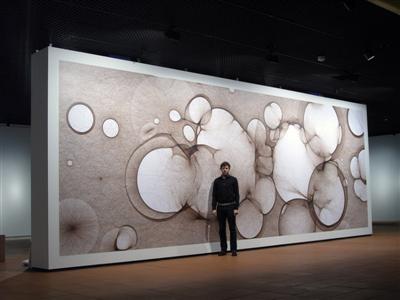 VVVV is a realtime video synthesis framework. It is a Windows only flowgraph based system, which seems to be built on top of DirectX and DirectShow. As seen on the Eno Henze image above, VVVV is also very suitable for creating static pictures.

ChucK is an audio programming language for real-time performance. It is possible to add and modify code without stopping the audio stream, which makes live coding sessions possible. I played a bit around with ChucK in the miniAudicle editor, which can be recommended – the real Audicle (a spectacular OpenGL interfaced IDE) on the other hand proved to be quite unstable.

For a more extreme version of live coding check out Quoth (now this is weird – a Zork-inspired user interface).