This post discusses some of the things I realised while coding the raytracer in Structure Synth and some thoughts about GPU raytracing.

After having downloaded a Keyshot renderer demo, I was able to figure out some of the tricks used to achieve this kind of performance.

The above image is a Structure Synth model exported in OBJ format, and rendered in Keyshot.

Some of these ideas should be relatively easy to implement. Especially the idea of using panoramic maps as light sources is clever – setting up individual light sources in Structure Synth programmatically would be tedious, and the complex lighting from a panoramic scene is very convincing (at least in Keyshot).

Henrik Wann Jensen also made some interesting comments about GPU computing: essentially he was not very impressed, and seemed convinced that similar performance could be obtained on CPUs, if utilizing the resources properly.

Of course Wann Jensen may be somewhat biased here: after all Luxions biggest competitor (and former partner), Bunkspeed, use a hybrid GPU/CPU approach in their Bunkspeed Shot raytracer. The raytracing technology used here is a licensed version of Mental Images iray engine.

Having tried both raytracers, I must say Luxion’s pure CPU technique was by far the most impressive, but as I will discuss later, GPU raytracing may have other advantages. (And it is really difficult to understand why it should not be possible to benefit from using both CPU and GPU together).

If you haven’t tried Keyshot, it is definitely worth it: I never really liked integrated raytracing environments (such as Blender), because it almost always is so difficult to setup stuff like light sources and materials, but Keyshot is certainly a step forward in usability.

As I described in my previous post, I made many mistakes during the development of the Raytracer in Structure Synth. And all these mistakes could have been avoided, if I had started out by reading ‘Physically Based Rendering‘ by Matt Pharr and Greg Humphreys. But yet again – part of the fun is trying to figure out new ways to do things, instead of just copying other people.

I have only read fragments of it so far, but still I can wholeheartedly recommend it: even though I’m a physicist myself, I was surprised to see just how far you can get using physical principles to build a complete raytracing framework. It is a very impressive and consistent approach to introducing raytracing, and the book covers nearly all aspects of raytracing I could think of – except one minor thing: I would have loved to see a chapter on GPU raytracing, especially since both authors seem to have extensive experience with this topic.

Now, for the past months I’ve made a few experiments with GPU based rendering and generative systems using GLSL. And even though Henrik Wann Jensen may be right, and the performance gain of GPU’s may be somewhat exaggerated, they do have some advantages which are often ignored:

The combination of being easy, fast, and dynamic, makes GPU rendering wonderful for exploring many types of generative art systems. In fact, probably the biggest hurdle is to setup the boilerplate code required to start a GLSL program. And even though there are many nice tools out there (e.g. Pixel Bender) none of them are really suited for generative systems.

So, for the past month I’ve been working a bit on an integrated environment for exploring GPU accelerated pixel based systems, called Fragmentarium. It is still quite immature, but I plan to release a version (with binary builds) later this January. 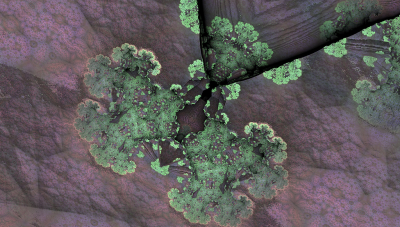 This also means that I will use most of my spare time on this project the coming months, but some of the ideas will probably find use in Structure Synth as well.

2 thoughts on “Creating a Raytracer for Structure Synth (Part III)”